With the rapid development of the industry, especially the use of raw materials of higher and higher grades, for example, nanomaterials are gradually promoted to use, in terms of mixing efficiency, effect and quality requirements for mixing are also higher and higher.

Broadly speaking, nanomaterials are materials that have at least one dimension at the nanoscale (1-100nm) in three dimensions or that are composed of them as basic units. Nanomaterials, also known as ultramicrogranular materials, are composed of nanoparticles. Nanoparticles, also known as ultrafine particles, are in the transition region between the atom cluster and the macroscopic object. From the perspective of micro and macro, such a system is neither typical micro system nor typical macroscopic system, but a typical human mesoscopic system.

In brief, nanomaterials have the following characteristics:

1) In the process of nanalization of materials, a large amount of positive or negative charges are accumulated on the surface of new nanoparticles. These charged particles are extremely unstable. In order to become stable, they attract each other and reunite the particles.

2) In the process of nanalization, a large amount of mechanical energy or heat energy is absorbed, so that the surface of the newly formed nanoparticles has a relatively high surface energy. In order to reduce the surface energy, particles often reach a stable state through mutual aggregation, thus causing particle aggregation.

4) Due to the hydrogen bond on the surface of the nanoparticles, the adsorption wet bridge and other chemical bonds, the particles are also prone to adhesion and aggregation.

Used for power type lithium ion batteries as "Submicron or nanometer anode materials such as lithium iron phosphate or anode carbon”, when mixing, it encounters “Submicron or nanometer scale, which easily causes “mass flocculation”.The following solutions are proposed to solve the problems caused by the phenomenon of "mass flocculation", such as the difficulty in dispersing evenly, the difficulty in mixing evenly or the long time of stirring.

2. The essence of this machine is "non-destructive stirring", which can well protect the stirred materials from being damaged.

6-1. The "RMRZH planetary dispersive emulsifying vacuum mixer" cannot be directly used for gluing (oil system: PVDF+NMP), that is, an independent gluing machine must be used to stir and mix "oil binder PVDF+NMP" after it is finished, and then it can be used for "homogenization (oil binder + positive or negative material)".

2. The section of "spiral twist type stirring slurry" is "pentagonal". The design of "low clearance and 18 degree engagement Angle" is adopted between the two stirring slurry.

3. The spiral twist mixing slurry is designed in strict accordance with the scientific spiral principle, cast and formed, and the spiral surface is processed and formed by the CNC machining center.

4. Each transmission shaft, especially the high-speed shaft, has been scientifically calculated (anti-torsion, shear and resonance frequency), which conforms to the rigid shaft design, avoiding distortion and resonance phenomenon of high-speed rotation.

7. The new "planetary gear box" is a "fully sealed structure" with multiple leak-proof structures to prevent external materials from entering the corrosion high-speed synchronous belt and gear lubrication. The external surface can be washed with pressure tap water; Although the structure is complex, it is easy to disassemble and facilitate the replacement of high-speed synchronous belt.

1-1-1. Design simulation of "low clearance of agitator with pentagon section and kneading extrusion with 18°" : 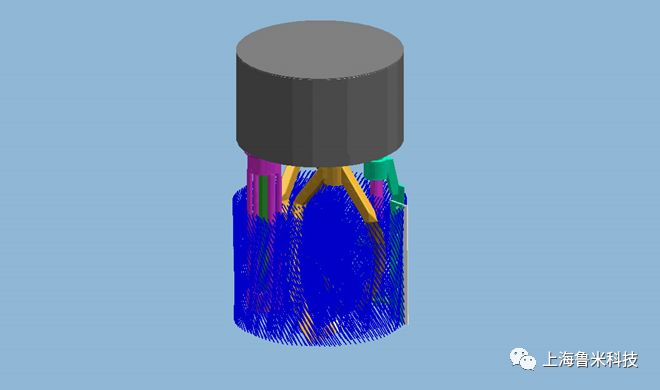 Please contact Rumi engineer at 021-80370855 for selection as per different work conditions.

Above picture for mold temperature machine for heating and cooling, and tilting for discharging material, for double planetary mixer